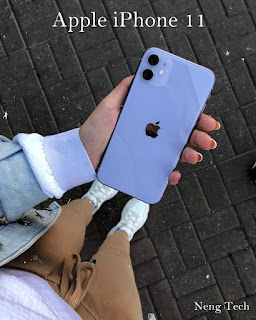 Hello everyone, in this article Neng Tech shares all important information you should know about a smartphone that is iPhone 11. Apple launched 3 iPhone 11, namely iPhone 11, iPhone 11 Pro and iPhone 11 Pro Max. The launch was carried out in Cupertino, United States, on Tuesday, September 10, 2019, by presenting various new technologies.

Despite the naming changes, the iPhone 11 is the successor of the iPhone XR and not the iPhone XS. This phone has a lot in common with the iPhone XR by bringing several improvements. However, that effort can also be said to fail to display some of the expected upgrades and instead has one or two decreases.

Here are the advantages and disadvantages of iPhone 11 :

In terms of camera, iPhone 11 gets a new main camera, 12MP f / 2.4 ultrawide. Some people prefer to have telephoto rather than ultrawide, but most prefer telephoto.

Apple's Ultrawide is very close to the Samsung 12mm lens (which feels wider than other ultrawide cameras on high-end phones). There is also a new 12MP f / 2.2 selfie camera that can record 4K video and has a wider field of view.

Apple claims its battery life is 1 hour longer than the iPhone XR, which has been praised for its durability.

The price of the iPhone 11 is slightly cheaper than its predecessor. In the United States, the 64GB base model is valued at the US $ 699, cheaper than the iPhone XR labeled the US $ 749 last year.

Another plus, the iPhone 11 comes in a variety of color variants, namely Black, Yellow, Red, White, Green, and Purple are new, although the color of Blue is lost.

Basic storage is 64GB. It was old-fashioned when Apple made at least 128GB of basic storage.

This is not a cheap cellphone and anyone can find a device that costs half but has more storage in its basic version.

The model notch is two years old. This screen of the same size has been around since the iPhone X, which came out in September 2017.

Apple has made Face ID better and installed the notch with the best selfie camera at the time.

Also, the iPhone 11 still uses the Lightning connector, which is lower than USB-C in both speed and capability.

Almost all cellphones today use USB-C which is better and more universal, even Apple's iPad Pro and Macbook itself.

The iPhone 11 Pro and 11 Pro Max are equipped with 18W capable chargers, but the iPhone 11 only gets a 5W charger. Although it has a fast 18W charging support.