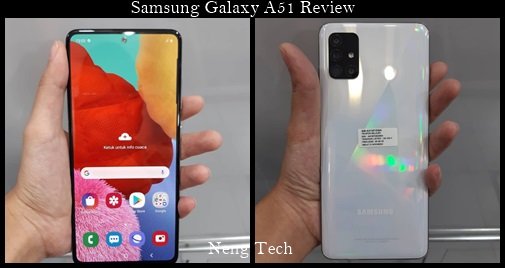 Samsung Galaxy A51 has Infinity O display or punch hole like those found on the flagship Galaxy Note 10 and Galaxy S10 series. So, there are no more disturbing black areas around the front camera.

The Super AMOLED panel extends 6. 5 inches with Full HD + resolution (1080 × 2400 pixels) in an aspect ratio of 20: 9 which is slightly longer than 19. 5: 9. This aspect ratio change does not make the A51 longer, the height is still exactly 158. 5mm as the A50s. This can be achieved because Samsung has reduced the screen bezel on the bottom side or the chin of the smartphone.

The Super AMOLED screen used by Samsung is indeed the best. The contrast on the screen can be displayed very well. When it comes to playing games and multimedia, the screen is able to display images optimally. What's more, the eyes don't get tired easily.

For the placement of its attributes, the power and volume buttons are on the right side. The SIM card is on the opposite side, with two nano SIM slots and one microSD slot. Meanwhile, the 3. 5mm audio jack, USB Type-C port, main microphone, and speakers on the bottom side and on the top side only have a secondary microphone.

Broadly speaking, the main design is still identical like other Galaxy A series smartphones. The design is simple and slim with a rainbow pattern and effect on the back, although the material used is still polycarbonate plastic and the face is coated with Corning Gorilla Glass 3.

Samsung Galaxy A51 operates Android OS 10 with a One UI interface version 2. 0. From the visual it is not so visible changes, but Samsung continues to strive so that the One UI can be used more easily even with one hand. For example, the new gesture system and application folder where the location of the application list is slightly down so it is easy to reach by the thumb. In addition, the dark mode feature is now better integrated with the system and works in more applications.

For biometric security systems, Samsung Galaxy A51 relies on a method of on-screen fingerprint scanner and face recognition that is practical and fast in recognizing its owner. This device is also equipped with a Samsung Knox security platform.

One more, a feature that for some people is very useful especially for those who live in the Capital City and use public transportation for daily activities. NFC, with this feature we don't need to worry about running out of e-money balances because we refill electronic money directly via smartphones.


The design of the back camera of the Samsung Galaxy A51 appears contemporary with a rectangular box frame. But more importantly, Samsung added an extra 5MP camera with a macro lens and a camera with a wide-angle lens increased from 8MP to 12MP.

The biggest improvement that occurred on the Samsung Galaxy A51 compared to its predecessor was the ability of the camera. Where Samsung adds an extra camera, 5MP (f / 2. 4) with a 40mm macro lens. Most other smartphones only have a 2MP macro camera. This close-up shooting is available separately from the photo mode, ideally the distance of the object is around 3-5 cm.

Another improvement, the camera with an ultrawide lens was upgraded from the previous 8MP to 12MP (f / 2. 2) and presented a 123 degree field of view. This wide-angle feature is available in photo and video modes, by clicking on the three tree icon directly above the shutter button.

One more, 5MP (f / 2. 2) as a depth sensor used in live focus photo mode to produce dramatic bokeh effects. The intensity of the bokeh can be adjusted from level 1 to 7. Other modes available are panorama, food, night, super slow-mo, slow motion, hyperlapse, and Pro.

Unfortunately, in Pro mode we can only set ISOs from 100-800, white balance, and exposure compensation. There is no option to adjust the shutter speed and manual focus. Not to forget, the Galaxy A51 features a scene optimizer and an automatic HDR.

Video recording, the back camera is capable of recording 4K UHD 30fps and 1080p 30fps video on the front camera. Samsung's highlight feature is Super Steady, which is useful for reducing shake when recording video. However, this feature only works at 1080p resolution, 4K video is not supported.


This part is no change, the Galaxy A51 is still driven by the Exynos 9611 (10nm) chipset, which is the same as in the A50s. This SoC contains an octa-core CPU consisting of a quad-core 2. 3 GHz Cortex-A73 and a quad-core 1. 7 GHz Cortex-A53. And the Mali-G72 MP3 GPU and 6GB RAM memory configuration with 128GB of storage. The good news, this SoC is fairly strong enough to handle multitasking daily tasks.

Even so, the game launcher is embedded in the Galaxy A51 which collects installed games and gaming settings. Like the profile ‘focus on performance‘ to make sure the smartphone is releasing its full potential and you can record action in games up to 1080p resolution.


Smartphones designed for live generation, battery life are the aspects to watch out for. Samsung Galaxy A51 comes with a large enough capacity battery, 4000 mAh. Complete with 15W fast charging capability.
Facebook Twitter